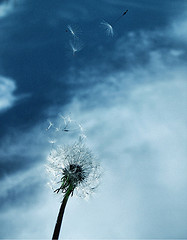 ‘Dandelion in the wind’

Having gardened for many years, I know how tough it can be to contain all of the plants inside of my garden area. Learning and teaching inside of a walled garden like our Moodle has some of the same limitations. Sometimes, the learning needs to escape into the world’s garden. I have worked with Tina Bessias on many wonderful projects and for many years we conducted workshops together for teachers at our school. She has always been a teacher who looked to challenge both herself and her students with work that could have meaning after the class was over. I was excited to hear that she was also a NCAIS Master Teacher. She clearly is one and I think we will both benefit from the challenges we face with becoming one of the first group of Master Teachers. Her Master Teacher project was about Immigrants and Interviews. A neat idea and one that I thought her students would both enjoy while also being challenged.

I received a very nice message, (which prompte this post) from Tina. She granted me permission to post it here as I liked how she included the earlier work her students had done with me as a reason for some of the success of the project.

I took six 9th graders to the ICG Conference at Carolina Friends School on Thursday.  Together, we presented our project to a small but engaged audience.  Mostly, I let the students do it, and I wish you could have seen them.  Nobody in the audience had used Moodle or created wikis before, and it was amazing to see the students’ work through their eyes.  They made seamless transitions among discussion forums, Garage Band, photo editors, wiki templates, and the concepts of the project–the variety of experiences they heard about from immigrants, the enthusiasm with which they referenced “my immigrant”…  It was a beautiful thing.  And throughout the project, they have mentioned and built on what they learned in Middle School.

WOW! What a Wonderful World View Student Centered project! I have been poking around in your course and Wiki and am awed by what you were able to harness and produce. I am also proud of what those students were able to create and do and am glad that my teaching laid a foundation. Too often, I wonder if what I do continues to be nurtured. Clearly, this project represents a prime example of the roles of a 21st Century teacher and learner.

Tina is a heavy Moodle user at the Upper School as her courses contain most of the modules that are available for use in classes. She has used the wiki in Moodle for many years even though most Moodle users agree, it is not very good. Moodle 2.0 has a much better, built from the ground up wiki which we will hopefully be able to use next school year. What Tina has accomplish with her project is to do the MESSY teaching and learning aspects of her project inside the walled garden of our Moodle. Only students and teachers can access it which limits projects living outside of a classroom or our Moodle. This is a classic use for a walled garden with 9th grade students. This is a picture of her Moodle tools used in the construction of the project. She used links, wikis, discussion forums and PDFs to guide the project. Some are active and some are grayed out as they are no longer available to students. 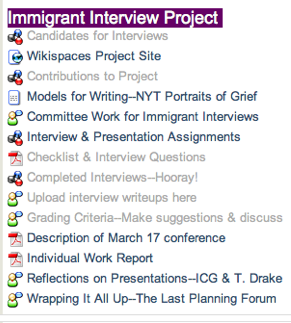 I am excited to attend the presentation to the Durham Academy community on April 3, 2011 at 4:00 PM to share the learning and work of these learners and immigrants. To see more of the learning that lives in the garden outside the walled garden, visit The World in Our Midst. 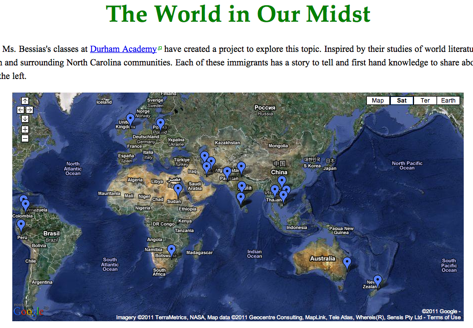 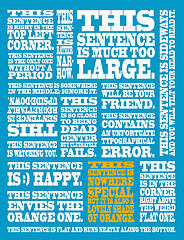 I have been working on my NCAIS Master Teacher Academy project with my group of 5th grade students. I wrote about Daniel Pink’s Two Question video earlier. In my last post on Learning to Teach how to Learn is Hard, I wrote how I was having to help my students take time to go deeper with this project. After 3 days of work in our Digital Learning Class, they have added sentences for each of the 5 people, added their sentences, (two were absent so not quite done). Some worked on trying to come up with who the two people are that Daniel Pink refers to as “He taught a generation of kids to read,” and “She invented a device that made people’s lives easier.” I do not know about you, but these were not obvious people to me so I thought the students should figure out who they are by researching. I have to say, that some of the students were taken aback when I said, I do not know for sure who these two people are, help teach me. It is interesting to listen to their findings. I think this might be a neat way to flip the research of people where the students are given a sentence and then must make the case for who the person is or why it is their sentence. Some of my students did add reasons why it was who they think it was. I left this part pretty wide open as I wanted the process to be guided by the students and not directed by me completely. As I wrote previously, this is not easy for both of us in the room as the students looked to me for advice and approval, and I struggled with saying just enough. I enjoyed watching the students begin searching for the sentence to see if it would be that easy. Of course, the result was usually Daniel Pink’s blog which meant the students had to try different search terms and strategies. I had hoped this would be the case as I tried to scaffold the lesson in such a way so that students would develop this understanding.

Now it is your turn to add to this VoiceThread. Please take the opportunity to add your sentence, have your class add their sentences, and figure out who those two people are. Pass this VoiceThread along to any one who might want to add to it. All I ask is that the work be serious in nature. If you have a video camera, record video, if you have a good microphone, record audio, or if you only have a keyboard, type the sentences. I would suggest if you are typing that you use a Word Processor to type the sentence and then copy and paste it into the comment as while any sentence is good, a misspelled sentence seems less educational. 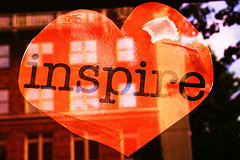 I took part in the first ever NCAIS Master Teacher Academy this past week and wanted to share a few inspirations from my wonderful learning adventure. In no particular order here they are:

1. Chris Gergen’s from Bull City Forward presentation was brief but deep. His book Life Entrepreneurs looks wonderful. His advise:  Think unreasonably. Young people are often afraid to risk failure so they do not take the risk. Going from fear of failure to fear of regret is often the step entrepreneurs take. Check out Unreasonable Institute.

2. Learning Times – Jonathan Finkelstein have amazing resources available to connect my class with all sorts of topics and people.

3. Smithsonian Conference Series offers so many ways to connect our students to learning.

4. Sugata Mitra: The child-driven education His TED talk is amazing and should shape all that we do with respect to creating learning environments for our students. His wiki is at http://sugatam.wikispaces.com/

5. The NCAIS Change Agents who presented how to deal with challenges that are presented. It is simple in that within Challenge is the word Change so there will be challenges with change.