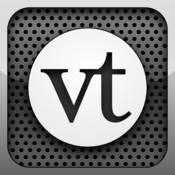 I have been a fan of VoiceThread for many years and use it with our school under the Ed.VoiceThread domain. The iOS app was a getting a bit long in the tooth so was excited to see that they have updated it to both take advantage of the iOS 7 update but also to make the use easier. I have been testing it and even though I had some issues to work out since we not only use the ed.voicethread sub-domain, we also use a single-sign on through Shibboleth which I think may have made things a bit more complicated on our end.

I was successful when I chose the following setup in Settings in VoiceThread:

The sharing has improved but still not as powerful as on a desktop or laptop. The addition of groups will definitely help although I generally start in the computer lab where students create the VoiceThread and then embed it into our Moodle course inside of a forum. We could do the same with a group although I would need to manage those groups which can be more effort then I want to put into the process. Still, the fact that VoiceThread has continued to iterate and improve their product is impressive given they had to adjust to the mobile non-Flash world.

To learn more about the changes to the iOS app go here.