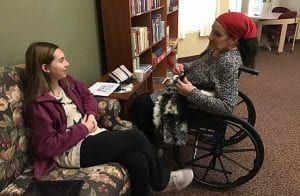 When Ben Michelman saw the examples from Brookwood School’s 3D Design Challenge Bank, he said we should totally do this Karl. While I was excited, I also was a bit hesitant to say yes. I was not sure I wanted to give up the time and wondered how the students would take to this type of outreach. After a few exchanges with Ben, I said, I am in as I realized it was fear that was keeping me from committing to doing it. I did not want to have our students believe that seniors are just afflicted people who need us to make stuff for them. I wanted a connection and an emphatic relationship so I knew it would take some setup and time. As Ellie is demonstrating in the above image, a relationship has been formed as she is engrossed in a conversation with Marcella Jerdon. Ben helped a lot with these aspects which allowed us to co-teach the unit. I put him in my Google Classroom as a teacher so he could see what we were doing as well as see all of the resources. The fear I did not share with my students but did tell Ben on our first visit was that I never want to end up in a place like this. Our first visit was in January and even though we had assigned partners we ended up needing to flow as not all seniors were available or able to join us on that day. Some seniors had not signed up, but just happened upon us and wanted to talk. One student was working with a senior who suffers dementia which impacted the ability to really develop the depth of relationship needed to devise a solution to a challenge. I suggested to any student that did not determine a challenge to help with to bring joy to their senior client.

Back in the STEAM lab, students started working on prototypes by thinking about how they might make the solution they had in mind. With a few tries, most students had working prototypes when we returned in February to present them. This visit was full of ups and downs for some students. A couple of seniors no longer wanted to participate or were not available. We ended up finding new seniors for these students since there is an abundance of seniors who would like to be a part of the project.

While there were many bright moments, the connection between Alden and Lynn showed the potential of what these conversations could lead to. Lynn suffered a stroke a few years ago so no longer has all of the use of her left arm and hand. It meant that playing cards were really difficult. After the initial conversation, Alden designed a holder for cards. He brought in a deck of cards from home to test his prototype to make sure it would hold cards like he designed. When he presented it to Lynn, she was thrilled beyond belief and said it was perfect. I asked Alden to keep asking how it could be better and after about 15 minutes, she said, “Well, to be honest, I like green, but Duke blue is my favorite color so I would love one that color.” 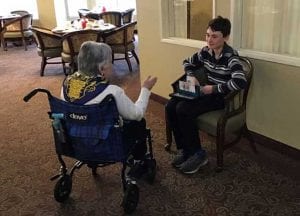 There are additional photos on DA’s Flickr stream. https://www.flickr.com/photos/durhamacademy/page3

Thanks to everyone who helped me face my fears, well most of them anyway. I still prefer to be on Camp Moondance Farm in my older years.