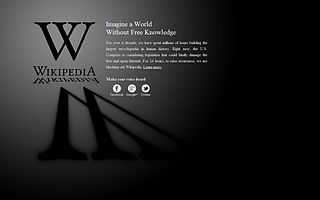 On January 18, 2012, the Internet began to live up to the collective tool that many of us think it is by unleashing it’s power on Congress. With many sites going dark or putting black banners across their name along with links to Congressional Members many members of Congress withdrew their support. Read more at Wikipedia (if it is not blocked) http://en.wikipedia.org/wiki/Stop_Online_Piracy_Act

After you listen to Clay, read about ACTA which is ACT II but on a world stage. http://en.wikipedia.org/wiki/Anti-Counterfeiting_Trade_Agreement

Reading The Spicy Learning Blog, I came across Clay Shirky’s TED Presentation. Very good for the full story of why SOPA and PIPA are DUMB Squared. (Doing Unknown Mischief Because you are Dumb).

No honest person supports piracy so it is a false argument. As Tim O’Reilly of O’Reilly Book Publishing, discusses in his post, SOPA and PIPA are bad industrial policy, piracy has always been around and in fact publishing started that way.

But history teaches us that it is primarily a result of market failure, the unwillingness or inability of existing companies to provide their product at a price or in a manner that potential customers want. In the 19th century, British authors like Charles Dickens and Anthony Trollope railed against piracy by American publishers, who republished their works by re-typesetting “early sheets” obtained by whatever method possible. Sometimes these works were authorized, sometimes not.

The Internet will not be the Internet if any of these laws are passed which also means that the new ways that learning can be changed by the Internet will not be available as many companies will for certain go dark. Call your representatives and let them know how you feel after you get informed yourself. In addition, this is a teachable moment that our students will connect with more then a historical fact although if you want to do a historical fact on the early printing, you might discuss the piracy that followed the invention of the printing press.