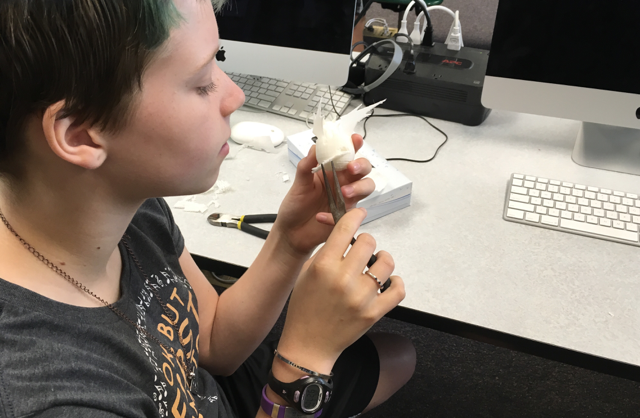 I am finishing up a rewarding month of offering camps on 3D Design and Printing along with a bunch of different Computer Coding camps. I have been helped by Donovan Polk and Hutch Castelao who have helped our campers create and learn new skills. This was the first time I offered a 3D Design and Printing camp and I am happy to say I thought it went really well. The image above is of Cal cleaning up their Dragon Egg that they designed and printed. This was the small version as we wanted to make sure it would work before we printed the larger version. I am impressed by how the 109 campers worked hard each day to learn to program. We used mostly free resources like Tinkercad, CS-First, Blockly, Code.org, and one paid service that we also use at school called CodeMonkey. I was very happy that the campers also enjoyed the format of most of the services we used as it allowed them to move at their pace instead of waiting for directions. Learning has come so far since I started doing camps years ago with respect to the resources that are now available. I can remember having Gala Taylor writing step-by-step tutorials for Scratch in the early days. The camps I do now are really more of a blended, personalized, or whatever name du jour you want to use. They are also much less effort than they were in the past since we can use these services instead of having to create everything on our own. This shift is also reflected in the way my STEAM by Design Seminar is conducted. Where else does this shift show up in schools, camps, and other informal learning? Oh, one other benefit, all are web-based and available anywhere the campers have an internet connection. For more information, see the Summer Coding Camps site we used for our camps.