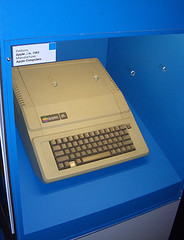 The iPad is the talk of most schools these days and even crops up in other areas of conversation. On episode #49 of of Hypercritical John Siracusa and Dan Benjamin discuss a three year old using an iPad that someone saw on a subway (18:15 – 21:50). The gist of the conversation is that many of us look at the way young people interact with technology and are impressed with how easy they use it. Their contention is that young people do not view technology as hard to learn how to use while most of us think that computers/technology is or should be hard to use. John goes on to talk about a 3 year old using a jack in the box on a horseless carriage and how amazingly the young child could use it. “being impressed by a 3 year old using an iPad is both the point and missing the point of the iPad. The point of the iPad is that it is the harbinger of technology that is easier to use then the old hard to use technology”. It is a great synopsis of how technology has continued to change and how the older technology users always marvel at how the younger users so quickly adapt. It has always been this way and if we altered our view that technology is hard to use, maybe we could also be amazed at how easily we took to using the tools. We just need to unlearn the knowledge that we learned along time ago that technology is hard and only nerds or really smart people could possibly use it. We should be less amazed at how young users can use the tool, and more concerned with how we can use it and teach with the new tools in new and different ways. I love listening to John and Dan complain and feel like I learn something each week from John.

Apple’s announcement yesterday about the new iBooks2, iBooks Author, and iTunes U app move us further down the road to either living totally in the Apple Universe or somewhere in between Google and Apple. I like Ryan Bretag’s post on Google or Apple: I Don’t Want to Choose. I could not agree more, but frankly see little hope with students and education being put before larger corporate goals. Education is both a market and an institution that people and corporations can say they support. Granted both do offer much support and have helped us move forward in ways we could not have imagined. I know that for the last 3 years or so I have been advocating the use of iTunes U resources to my colleagues. With the app, it will put it on the iPad while still being available through iTunes on the Macintosh or WIndows computer. Here are a few links that will give more information. Edudemic’s Ultimate Guide, Audrey Watters wrote a good Hands on With iBooks Author piece, (Thanks Richard Bryne) will get you started. I started playing around with all aspects of there announcement and what I felt the most was, sadness.  I miss Steve, and his energy at these types of events as he would get me so hyped I would look forward to learning how to use the tools so I could share them with my colleagues. I will still do that, but I like having Steve’s wind in my learning sails.

These three resources discuss the iPad as a learning tool and could help schools implement successful programs.

21st Century Fluency Project’s Launching an iPad 1 to 1 – A Primer. A very well written “punch list” of sorts for schools.

A blog post in the Chronicle of Higher Ed journals a professor’s experience using iPads with his students. Good lessons to be learned here.

Scott Meech did a great K12 Online Conference session on the iPad vs iConsumption.